I would like to think of the creation of The Highlander School as part of an ongoing  story. A story that began as a dream for every child, citizen to live into his or her fullest potential. With sincere humilty, I’ve often described myself as  the “inheritor of this dream”, a member of the first generation born after the Civil Rights Movement, reaping  the benefits of the unrelenting work for that which my mother, family and so many others fought. Their perseverance was deeply rooted in hope and a desire for a better future for their children and equity in education was viewed as a cornerstone to progress and a rebuttal of oppression. In this context, I see in this chapter of the American story a parallel to the narrative of the emergence of the Municipal Infant-Toddler Centers and Preschools of Reggio Emilia, Italy.

The internationally recognized schools of Reggio Emilia in northern Italy arose out the ashes of World War II, devastated  by fascism and conflict. And yet its citizens with determination and conviction sought to rebuild, again ignited by  their aspirations for their children and a vision of a democratic and just society. What truly is an inspiration is the systemic manner in which this community developed schools over the next decades, collaboratively, pressing through conflicts to actualize the theories of John Dewey, Paul Hawkins and the theory of Social Constructivism from Lev Vygotsky.

These schools were placed on the world stage when in 1994, when a Newsweek article named the schools in Reggio as the best of the world. This attention brought inquisitive educators from around the world including many from the United States, like myself. Visitors to the early childhood schools of Reggio Emilia are often impressed by the beauty and thoughtfulness of the spaces, the visible traces of the culture, the view of children as highly competent, and their progressive pedagogy.

Often in our intrigue and awe of the Reggio educators’ work with young children and families, educators in the U.S. have overlooked the rich history and story behind their accomplishments. Our consumption culture, mistakenly prompted some of us to seek a “How to Manual”.

In 2008, I had the opportunity to visit Reggio Emilia  and its infant-toddler and preschool centers to learn (and I’m still learning). I’ve struggled to describe that experience as it was so rich and wrapped me in a cascade of thoughts and reflections. Something quite unexpected happened to me in Reggio Emilia.  I journeyed there looking for answers and, in turn, they challenged me to look within.

Carl Jung words seemed to resonate more than ever “He who looks outward dreams. He who looks inward, awakens.”

How ironic in that I  traveled thousands of miles to study the philosophy of  the educators of Reggio Emilia, impressed with their history, and yet I under-appreciated ours despite the fact that I live mere miles from the birthplace of the Dr. Martin Luther King and the Civil Rights Movement. In pondering this, I found a correlation between the narratives of the schools of Reggio Emilia and those of the Civil Rights Movements. Communities coming to grips with the reality that all its citizens were unable to attain, life, liberty and the pursuit of happiness. In examining my own history, I was inspired by the role of The Highlander Folk School in the Civil Rights Movement. It  served as safe haven in Southern Tennessee for racially integrated dialogue and prepared many leaders in the Southeast such as Dr. King, Rosa Parks and John Lewis for non-violent resistance to social injustice. 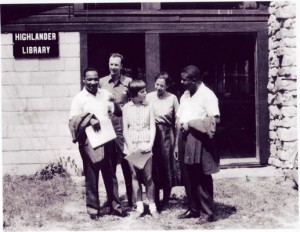 Our new Highlander School for our youngest citizens, draws its inspiration from the schools of Reggio and from the civil rights leaders and ordinary citizens, that made extraordinary commitments to ensure that everyone has voice to be heard and seat at the table.Our work in the United States is still  incomplete, as my mother would often say, “The dream of Dr. King still hasnʼt been fully realized until all children have the same opportunities to receive a decent education.”

I am committed to creating  a community of learners  based upon the ideas and values of democracy . So you won’t find worksheets or flashcards, at The Highlander School. Not because we don’t want children to learn, in fact, we do. But learning in a democracy is more than just memorization.

“To save man from the morass of propaganda, in my opinion, is one of the chief aims of education. Education must enable one to sift and weigh evidence, to discern the true from the false, the real from the unreal, and the facts from the fiction.” Martin Luther King, Jr., The Purpose of Education

Our endeavor is to foster a community where children learn how to learn. We want children and citizens to have the critical thinking skills, the ability to understand another person’s perspective while articulating their own. The Highlander School’s approach values children  not for their future  economic function in society, but for their undeniable right to be in this world as a respected citizen here and now.